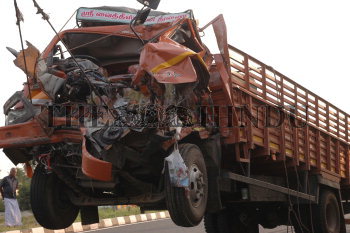 Caption : DINDIGUL, 07/05/2011: Mangled remains of a mini lorry which hit back of a cement container lorry parked at Ammbathurai near Chinnalapatti in Dindigul district on May 07, 2011 early morning. Three persons were killed on the spot in this accident. Four others were seriously injured and admitted in Government and a private hospital in Dindigul. Photo: G. Karthikeyan