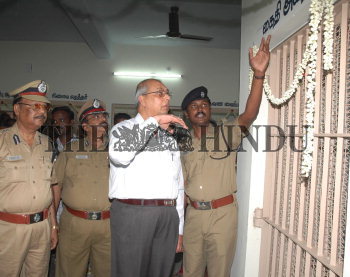 Caption : MADURAI, 13/05/2007: The Director General of Police D. Mukherjee (third from left) inspecting the new building for Karuppayoorani police station after inaugurating it in Madurai on May 13, 2007. Also seen (from left to right) are the DIG (Madurai Range), A. Khalimullah Khan, the IGP (South Zone), Sanjeev Kumar and the Madurai SP, T.S.ANBU. Photo: G. Moorthy