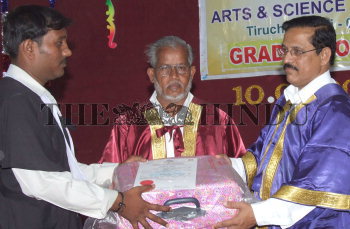 Caption : TIRUCHI, 10/05/2007: K.S. Daulat Thameem, Former Passport Officer, Tiruchi, presenting degree along with a special prize to a University rank holder during the convocation of the M.I.E.T. Arts and Science College in Tiruchi on May 10, 2007. A. Mohamed Yunus, the Correspondent of the College is also seen in the picture. Photo: R. Ashok