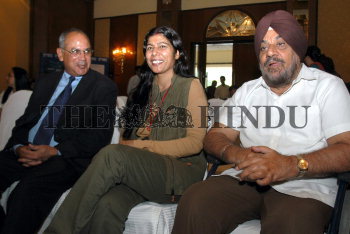 Caption : NEW DELHI, 09/05/2007: Member of the first Indian team to climb Everest and President of the Indian Mountaineering Foundation, Maj.H.P.S. Ahluwalia, the first women to scale Everest twice, Santosh Yadav and Executive Vice- President and Managing Director, Discovery Networks India, Deepak Shourie at the preview of ''Everest:Beyond the Limit'' a six part series to be aired on Dicovery Channel, in New Delhi on May 09, 2007. Photo: S. Subramanium