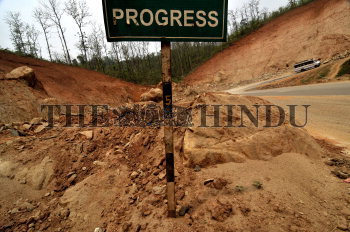 Caption : GUWAHATI, 19-04-2011:Progress is on by destroying massive amount of hills in Jorabat area in Assam-MEGHALAYA state border in the out skirts of Guwahati on April 19, 2011.The 41st anniversary of the Earth Day will be celebrated by millions around the world aiming to protect the only planet. The idea behind the day is honoring the planet and all living things that inhabit it. Photo:Ritu Raj Konwar