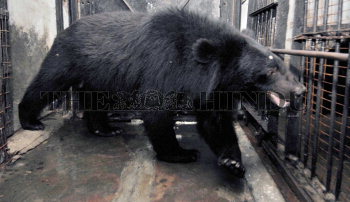 Caption : HYDERABAD, 14/04/2011: The Himalayan BLACK bear (Selenarctos thibetanus laniger) is a rare subspecies of the Asiatic BLACK bear now finds house in an enclosure in Nehru Zoological Park in Hyderabad on April 14, 2011. Himalayan BLACK bears are scattered across the Himalayas from Bhutan to Pakistan. They are most popular in mountainous areas and jungles during the summer, can be found in warmer areas in Nepal, China, Russia, and Tibet at altitudes of 10,000 to 12,000 feet up near the timberline. For winter, they descend as low as 5,000 to more tropical forests. Zoo was brought this animal from Tripura zoo especially to attract summer crowd will be officially released in the enclosures from this weekend. Photo: Mohammed Yousuf