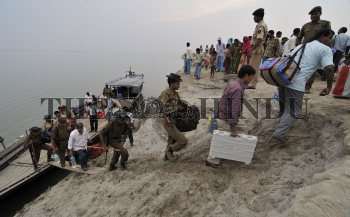 Caption : PALASBARI, 10/04/2011: Polling officials along with Electronic Voting Machines (EVM) and security personnel get down from a country boat on the eve of the SECOND phase of voting in Kamrup district of Lower Assam about 100km away from Guwahati on Sunday, April 10, 2011.Altogether 496 candidates are in the fray for 64 constituencies spread over 14 districts of Assam state that go to the polls in the SECOND and final phase of the Assam Assembly elections on April 11. Total 96,78,720 voters will cast their votes for the SECOND phase of election. More than 40,000 police and paramilitary troopers have been deployed in various places for a peaceful election. A total of 2,033 and 4,175 polling stations have been identified as hyper-sensitive and sensitive for the SECOND phase of polls. Photo: Ritu Raj Konwar