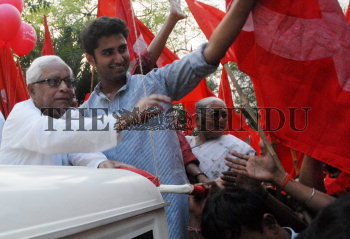 Caption : KOLKATA, 09/04/2011: A melange of old and new candidates of the Left Front was seen at Chief Minister Buddhadeb Bhattacharjee's first mass election rally for upcoming State Assembly elections in Kolkata on April 09, 2011. One of the most senior candidates, Mr. Bhattacharjee was also campaigning for the youngest Left Front candidate Satarup Ghosh (right) at the rally. Photo: Sushanta Patronobish. 09.04.2011