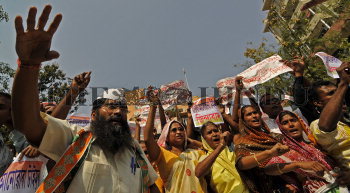 Caption : GUWAHATI, 10-03-2011:Congress supporters staging a protest seeking Election ticket for their candidates in Guwahati on March 10, 2011. The Congress screening committee meeting held in Delhi for finalizing the candidate's list, and therefore most of the Congress supporters and candidates are camping in Delhi for Election tickets. Congress is likely to declare their candidate's list on March 13th, 2011. Elections will be held in Assam on 4th and 11th April in two phases for the 126 Member State Assembly. Besides Assam, West Bengal, Tamil Nadu, Kerala and Puducherry to go for polls between April 4 and May 10. For the first time, overseas Indian citizens of Assam can also enroll themselves as voters and franchise thier votes. Photo:Ritu Raj Konwar