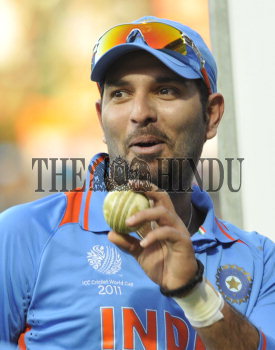 Caption : Bangalore: 06/03/2011. Yuvraj Singh of India shows the ball with which he took five WICKETS in the match against Ireland in the ICC Cricket World Cup 2011 at the Chinnaswamy Stadium in Bangalore on March 06, 2011. Photo: K. Bhagya Prakash