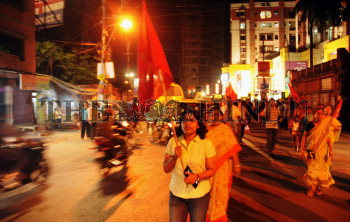 Caption : Kolkata: The sixth phase asssembly poll in West Bengal has been announced by the Election Commissionor of India and the political parties have started initiating various mode of campaign for the big battle in Kolkata on Saturday. Photo: Arunangsu Roy Chowdhury March 05, 2011.