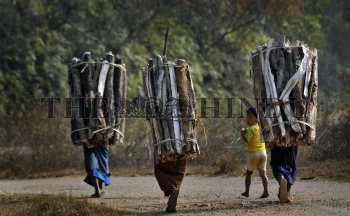 Caption : KARBI ANGLONG, 05/03/2011: Tribal women bring fire wood from their Jhum field in Karbi Anglong district of Assam on March 05, 2011. Jhum fields are prepared by burning the forest for Jhum Cultivation which is also known as slash and burn agriculture. The practice of Jhum cultivation was not harmful earlier days but due to increase in population, and non-availability of land, the cultivation cycle nowadays has reduced to 2-3 years, thus resulting into large scale damage to the forests which lead to deforestation and denudation of hill slopes. In North-East India over a 100 of tribal ethnic groups are practicing shifting cultivation and in certain parts of this region it is practiced not only by the tribal but also by the landless people and lowland migrants. A recent study based on satellite data carried out by the Assam Remote Sensing Application Center (ASTC Council) shows that in the Karbi Anglong District of Assam the area currently under Jhum cultivation is in an increasing trend. Photo: Ritu Raj Konwar