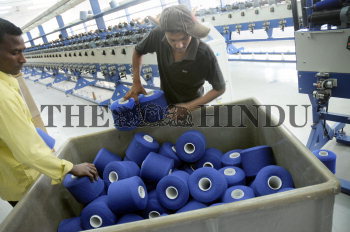 Caption : Kolkata: Workers are busy handling the cotton yarns at a textile unit at HOWRAH in West Bengal on Thursday. To protest the imposition of 10 per cent excise duty on readymade garments in the current budget proposal for the year 2011-12, the textile industry in India has called for one day strike on March 04, 2011. The textile industry is one of the leading in the world. The current domestic textile market of US$ 34.6 billion is expected to be increased to US$ 60 billion by 2012. But according to the industrial giants in Kolkata, the imposition of excise duty besides the rising prices of cotton yarn will not only throw the industry out of gear, it will also make huge impact on the consumers. Photo: Arunangsu Roy Chowdhury March 02, 2011.