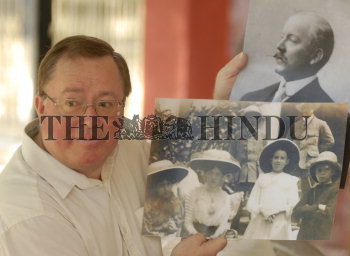 Caption : BANGALORE, 03/03/2011: British JOURNALIST and Broadcaster Mike Souter's (left) search for the missing Indian family of his grand father has led to a treasure trove of historically significant material dating back to the early part of 20th century Mysore royalty. The Wealth of material includes photographs and documents pertaining to the work of Frederick Denison-Smith at the Mysore and Bangalore Palaces showing photograph of Frederic Denison - Smith and other photographs at a Press Conference in Bangalore. Photo: K. Gopinathan