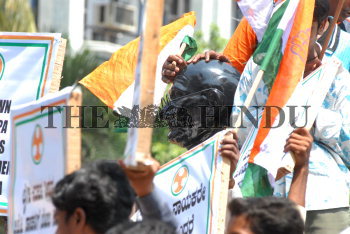 YOUTH CONGRESS MEMBERS AND MEMBERS OF KPCCI IN BA

Caption : BANGALORE, 25/04/2007: Mahatma Gandhi's statue sandwiched by the youth Congress protestors on Race Course Road in Bangalore on April 25, 2007. Youth Congress members and members of KPCCI staged a protest against human smuggling and sexual harassment by some MPs and MLAs. Photo: K. Gopinathan