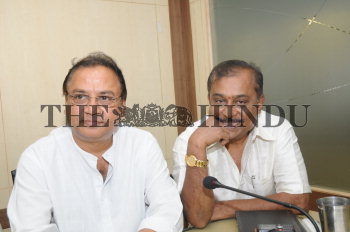 Caption : BANGALORE, 21/02/2011: Actor Ashok (Left) and HAMSALEKHA (real name: Govindaraju Gangaraju), music director and lyricist in the Kannada film industry, during the press conference by Karnataka Film Chamber of Commerce (KFCC) president, regarding the Kannada film industry participation in the Vishwa kannada Sammelana 2011 to be held at Belgaum, at Film Chamber in Bangalore on February 21, 2011. Photo: K. Murali Kumar