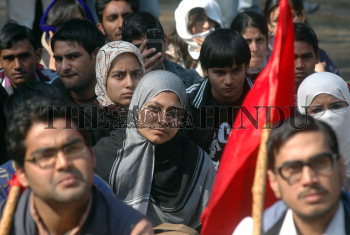 Caption : NEW DELHI, 19/01/2011: Members of All India Student's Association (AISA) during the Nation wide campaign against the Corruption and State repression, convention is being held in the backdrop of the recent verdict by the Raipur Sessions Court sentencing well-known Doctor and human rights activits Dr. Binayak Sen to life imprisonment for 'Sedition' at Delhi University on January 19, 2011. Photo:Sushil Kumar Verma