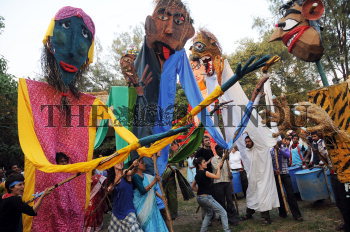 THEATRE OF THE OPRESSED

Caption : Kolkata:The members of the Theatre of the Oppressed, Germany and Sundarban in West Bengal are performing a puppet drama at the inaugural ceremony of the ?Muktadhara IV?, a different drama festival organised by Jana Sanskriti- Centre for the Theatre of the Oppressed in Kolkata on Tuesday. Theatre of the Oppressed is not a conventional political theatre; this is Theatre as politics, which was started by Brazilian theatre practitioner Augusto Boal first elaborated in the 1960s, initially in Brazil and later in Europe. By creating a democratic space actors and spectators, engage themselves in a debate to find out the ways of changing the oppressive social and political reality. The spectators in this theatre are ?spect-actors?. Jana Sanskriti is the first Indian exponent of the Theatre of the Oppressed and only group in the world, which practices Forum Theatre in rural areas. The group raise their voices against the ongoing human rights violation in the name of ?Development? through their strong theatrical performances. They question to the present model of development, which essentially deprives the poor from their means of livelihood. Jana Sanskriti started its work in a small village in the Sunderbans in 1986. Today it has 30 theatre teams in West Bengal, one each in Tripura and Jharkhand. Photo: Arunangsu Roy Chowdhury Dec-14, 2010