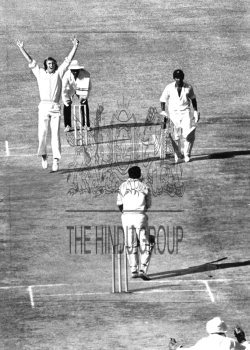 Caption : MADRAS, 15/01/1977: MCC IN INDIA: The controversial John LEVER throws up his hands in joy after dismissing Ashok Mankad bowled, on the second day of the Fourth Test between India and England, on January 15, 1977. Gavaskar is the non-striker. Photo: S. Kothandaraman