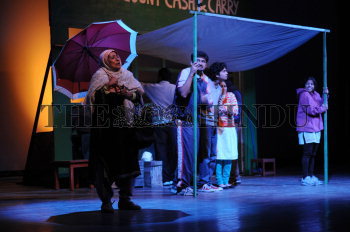 Caption : BANGALORE, 02/12/2010: The Indian Ensemble presenting the winner of 2008 MetroPlus Playwright Award English play 'Harlesden High Street', during the opening of The Hindu MetroPlus Theatre Festival, at Jnana Jyothi Convention Centre, Central College Campus, in Bangalore on December 02, 2010. The play powerfully explores issues of immigration and identity. Written by Abhishek Majumdar and directed by Neel Chaudhuri, incidentally another MetroPlus playwright awardee, ?Harlesden High Street? is set on the High Street in Harlesden, inhabited mostly by immigrant communities?Jamaicans, Poles and Pakistanis. The street is notorious for its high crime rate but also has latent within it the aspirations and frustrations of the middle class. The play depicts these various issues through the stories and voices of three Pakistani immigrants?Rehaan, Karim and Ammi?during the course of a day. Photo: K. Murali Kumar