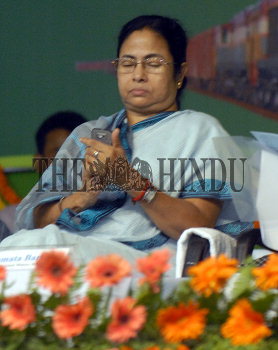 Caption : KOLKATA, 16/11/2010: Railway Minister Mamata Banerjee at the inauguration of work for a dedicated freight corridor at Dankuni in Hooghly district of West Bengal on November 16, 2010. The 1806-km eastern corridor will extend from Dankuni to Ludhiana and pass through several mining and industrial towns and is being designed for a maximum train speed of 100 kmph. Photo: Sushanta Patronobish