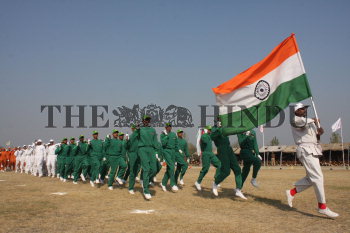 Caption : SRINAGAR, 03/11/2010: Central Reserve Police Force hold Indian flag during their passing out parade on November 03, 2010 in Humhama, near Srinagar, Kashmir. 237 newly trained CRPF recruits took oaths to serve by working in the police force during their passing out parade. The recruits have successfully completed their 44 weeks of basic training which involved physical fitness, weapons handling, map reading and counter-INSURGENCY operations. These recruits will join police to fight militants in Kashmir. Photo: Nissar Ahmad