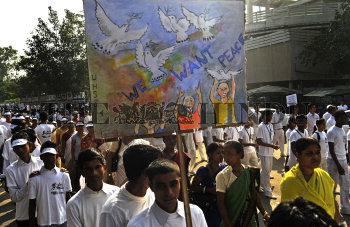 Caption : GUWAHATI, 30/10/2010: School students along with public taking part in the Guwahati Run for peace on the occasion of the two years of Assam serial bombings in Guwahati on October 30, 2010. The peace run is aimed at taking resolve to fight terror publicly and pay homage to those who lost their lives or those maimed in the attacks. A series of programmes have been organized throughout Assam state to observe October 30 as black day and to take a pledge to fight terror and usher in a new dawn of peace in Assam. Two years after serial bombings in Assam killed nearly 100 people and injured around 800, victims are still seething with anger as those behind the attack are still unpunished and the compensation promised by the central government is yet to reach them. Nine serial explosions rocked Assam on October 30, 2008. Photo: Ritu Raj Konwar