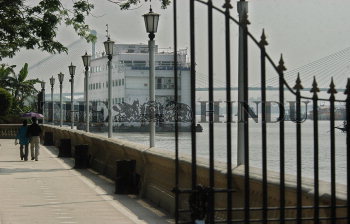 Caption : Kolkata: April 05, 2007: The Floatel is the first and only Floating Hotel in India as seen from the Millenium Park on the bank of river HOOGHLY. The four-storied Floatel has been built as per international four-star standards. It is centrally air-conditioned with 73 rooms and three suites with attached marble and ceramic bathrooms. It has a 24 hour coffee shop named "The Bridge", which is capable of accommodating 110 guests along with a specialty restaurant named "The Compass Room", Sea food and Bar-B-Q Decks and a fully equipped air-conditioned Banquet Hall for 200 people, a modern Reception and a Promenade Deck capable of accommodating 400 people on the river front. It also boasts of a car park and a fully equipped Captain's Room for meeting, conferences etc. Floatel is expected to be a major destination for business travelers as it is fully equipped with "State of the Art" meeting and conference facilities. Photo: A. Roy Chowdhury