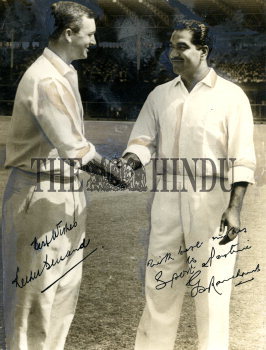 Caption : BOMBAY, 03/04/1962: The four-day Festival cricket match between the Commonwealth XI and the Cricket Club of India President's XI, led respectively by Richie Benaud and Ramchand, ended in a draw on April 03, at the Brabourne Stadium, Bombay. The captains shake hands. Photo: The Hindu Archives