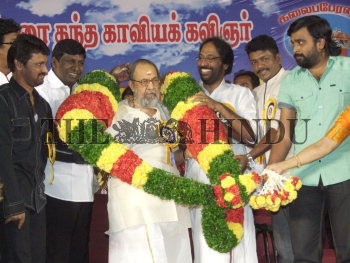 Caption : TIRUCHI, 22/08/2010: Tiruchi N. Siva, MP, felicitating lyricist Vaali at a function organised by Kalaiperavai, an association for the protection of art and artistes, in Tiruchi on August 22, 2010. Photo: R.M. Rajarathinam