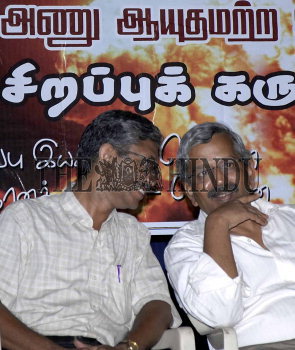 Caption : CHENNAI, 06/08/2010: T. Jayaraman (right), Director, Tata Institute of Social Sciences, Mumbai having a word with K. Ramesh, Secretary, TISS at a remembrance meeting on the nuclear BOMBING of Hiroshima and Nagasaki, organised in Chennai by the Movement Against Nuclear Weapons (MANW) and Indian School of Social Sciences at Kerala Samajam in Chennai on August 06, 2010. Photo: V. Ganesan