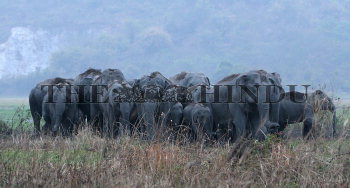 Caption : CAPTION: ASSAM-GUWAHATI„23-03-2007 : (WILF ELEPHANT IN SEARCH OF FOOD) A herd of wild elephant move in search of food which has come down from near Amsung reserve forest in Hajong Bori village near Thakurkuchi Railway Station in the out skirts of Guwahati city on the morning of March 23, 2007. Residents of Hajongbori area woke up to a scary morning on Thursday when around 70 wild elephants, including seven calves, descended in the area from the nearby reserve Forest, purportedly for grazing. This is the place where three tuskers were killed by a train two years back. Rampant deforestation in the forested areas on the outskirts of the city has forced the gigantic mammals to come to the residential areas and croplands in search of food. PHOTO: RITU_RAJ_KONWAR