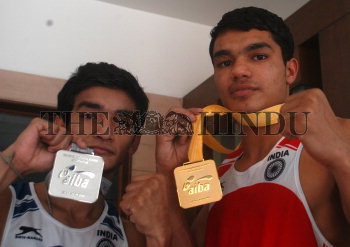 Caption : NEW DELHI, 05/05/2010: Indian boxers Vikas Krishan (right) and Shiva Thapa, who won the gold and silver medals respectively at the World Youth Boxing Championship in Baku recently, pose with their medals in New Delhi on May 05, 2010. Photo: Sandeep Saxena