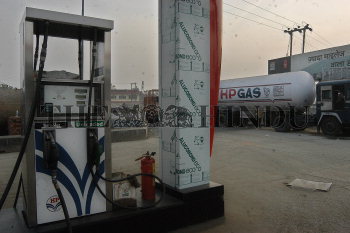 Caption : HOWRAH, WEST BENGAL, 29/01/2007: A deserted view of a petrol pump on the National Highway near Kolkata on January 29, 2007 in Howrah district, West Bengal. Nearly two thousand oil tankers are on an indefinite strike for the last five days demanding hike in freight charges. The West Bengal Tankers Association's strike has created havoc in the city of Kolkata and nearby districts. Nearly 85 percent petrol pumps have become dry due to the lack of supply. Photo: A. Roy Chowdhury