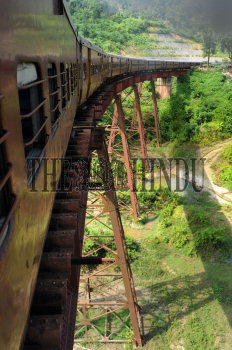 Caption : HALFLONG, 04/09/2009: The Hill Queen train (meter gauge) on its way to Halflong town ? the head quarter of the North Kachar Hills district of Assam on October 04, 2009. Halflong is the only hill station of Assam state lies at an altitude of 3,000 ft from sea level. Halflong is world famous for a mysterious place called Jatinga which is situated in the peak of the Halflong hills where during the month of September-October varieties of wild birds come and commit suicide. Due to INSURGENTS activities this tourist destination was severely affected for last couple of years. But after the recent surrounder of the Dima Halam Daogah (DHD-Jewel) militant group on October 02, 2009, there has been no militant activity in this area and people hope tourist from all over the world will once again come to NC Hills. Photo: Ritu Raj Konwar