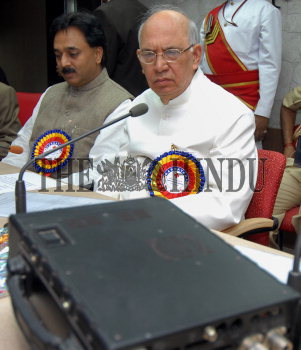 Caption : BANGALORE, 12/08/2009: Indian Red Cross Society's inauguration of Henry Dunant Hall and launching of Red Cross Amateur Radio Station (HAM) by the Governor H.R.Bhardwaj who looks irritated when one of the organisers asked him to inaugurate the Ameteur Radio Station to get rid of the news and visual photographers blocking the way of the participants and the Governor refused and with him is Woody P. Krishna, Vice-Chairman, Indian Red Cross Society, Karnataka Branch, in Bangalore on August 12, 2009. Photo: K. Gopinathan