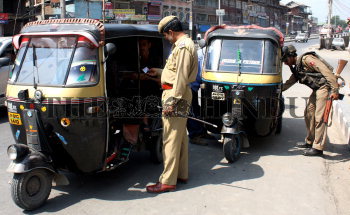 Caption : SRINAGAR, 11/08/2009: Policemen checking the identification cards of autorickshaws at a barricade check point set up to prevent a separatist march during a strike in Srinagar on August 11, 2009. Shops, schools and business establishments remain closed across the State as separatist groups observe the death anniversary of a prominent Kashmiri leader Sheikh Abdul Aziz killed during a protest last year. Photo: Nissar Ahmad