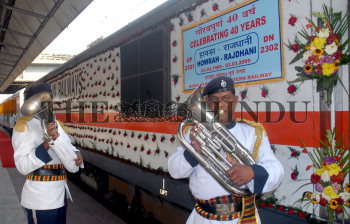 Caption : Kolkata: Forty years ago this day, March 3,1969, HOWRAH-New Delhi Rajdhani Express, the country's first super fast passenger train, was flagged off from HOWRAH Station. To commemorate the event, a special function was organised by Eastern Railway on Tuesday at HOWRAH station just before the departure of the train. Special band played music, a huge cake was cut, the old as well as present staff of the train were felicitated and the dignitaries present, including films stars, musicians and othes, flagged off today's HOWRAH-New Delhi Rajdhani, all wishing Happy Birthday to the train. Photo: Sushanta Patronobish 03. 03. 2009.