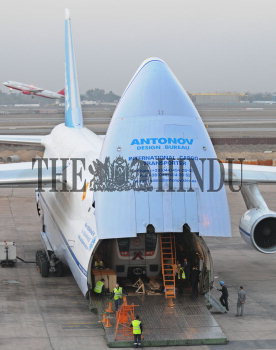 Caption : NEW DELHI, 26/02/2009: The Metro Rail carriage "Bombardier MOVIA" which arrives from Parchim, Northern Germany by an Antonov AN-124 air freighter being unloaded at the IGI Airport in New Delhi on February 26, 2009. Bombardier Transportation will assemble 424 cars for the Delhi Metro Rail Corporation. Photo: V.V. Krishnan