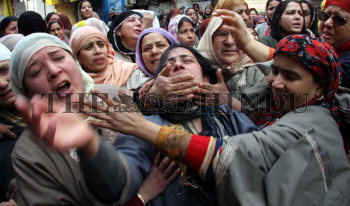 Caption : SRINAGAR, 24/02/2009: Relatives of Shabir Ahmad Bhat grieve in Srinagar on February 24, 2009. Bhat, an auto driver and close relative of JKLF leader Yasin Malik died in a mysterious circumstances, after his body was recovered from the Parimpora locality, a city outskirt. The killing triggered violent protests in Srinagar. Photo: Nissar Ahmad