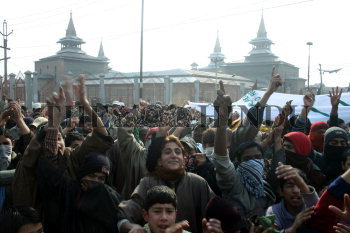 Caption : SRINAGAR, 09/01/2009: Kashmiri protesters burn the flag of USA during protest against Israel's attacks on Gaza, in Srinagar on January 09, 2009. At least 10 people were injured in Kashmir when police fired teargas shells and used batons to disperse hundreds of Muslim demonstrators protesting against the Israeli offensive on Gaza. Photo: Nissar Ahmad