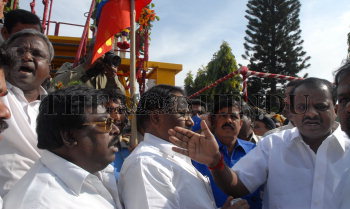 Caption : Chief Minister H.D. Kumaraswamy (right) reacting to a demand made by a section of Dalits who wanted the Government not to delay the process to fill vacancies in its offices, when he, and Deputy Chief Minister B.S. Yediyurappa (not in photo), arrived to garland the statue of B.R. Ambedkar near Vidhana Soudha in Bangalore to mark his 50th death anniversary on December 06, 2006. Photo: K. Gopinathan