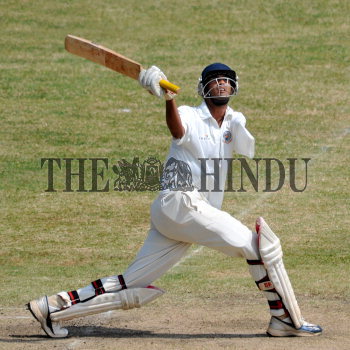 Caption : VISAKHAPATNAM, 21/10/2008: One-arm wonder: Andhra batsman Y. ABHIMANYU plays a shot during the South Zone under-19 Vinoo Mankad trophy cricket match against Tamil Nadu in Visakhapatnam on October 21, 2008. He picked up two wickets from two overs conceding eight runs though Andhra lost the match. ABHIMANYU lost his left hand at a very early age but this handicap did not deter him from playing his favourite game cricket. ABHIMANYU bats well with single hand. He is playing for Andhra in the junior level tournaments. Photo: K.R. Deepak