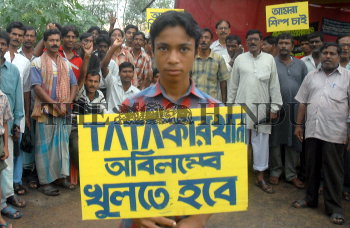 Caption : Kolkata: The supporters and members of the Pashchim Banga Nirman Karmi Union, a wing of CITU formed for the Singur Tata Motors project have started a ădharnaä infront of the at project site demanding the resume of work at the plant on Saturday. The work has been sieged at the Tata Motors plant from Aug 28, 2008 as the Trinamool Congress supporters stopped the workers to join the work during their fortnight long ădharnaä at the same venue. Photo: Sushanta Patronobish. September 13, 2008.