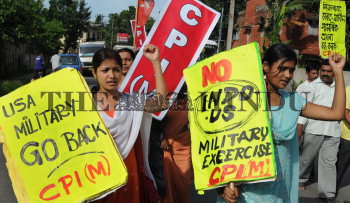 Caption : GUWAHATI02-08-2008 : CPI (M) PROTEST AGAINST THE INDO-US JOINT MILITARY EXCERCISES IN MIZORAM: Members of the CPI (M) protesting against the joint Indo-US military exercises in Guwahati on Saturday, August 02, 2008. Indian and American forces has started a joint maneuvers on counter-terrorism in the northeastern regionās Mizoram state from 2nd August. Operation Vajraprahar will be the ourth round of joint excercises between in the special forces of the two countries. A batch of 30 American Special Forces personnel would be arriving in Mizoran on August 2 to take part in the exercise, which would be held in the specialized Counter-INSURGENCY ranges of the Indian armyās famous vairangte-based Counter INSURGENCY and Jungle Warfare School in Mizoram. PHOTO: RITU_RAJ_KONWAR