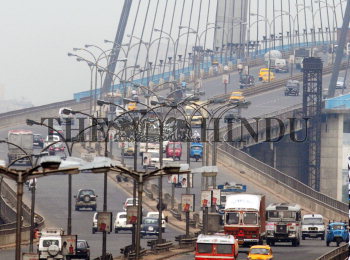 Caption : Kolkata:A view of the Vidyasagar Setu, the longest bridge of its type in India and one of the longest in Asia which is the second bridge connecting twin cities Kolkata and Howrah. The bridge is named after the 19th century Bengali reformist Ishwar Chandra Vidyasagar. The Vidyasagar Setu is a cable-stayed bridge, with a main span of a little over 457 metres, and a deck 35 metres wide. Construction started in 1978 and the bridge was finally inaguarated on the 10th of October, 1992. The commissioning agency was the Hooghly River Bridge Commission (HRBC) and the contractors for the construction was the consortium of Braithwaite, Burn and Jessop also called BBJ. Photo: Arunangsu Roy Chowdhury July 08, 2008.