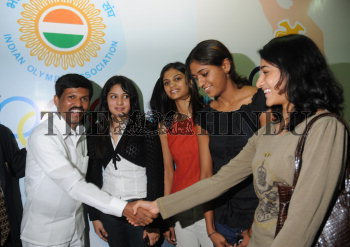 Caption : BANGALORE, 11/06/2008: The new Karnataka Sports Minister Gulihatti D. SHEKAR greeting young sportspersons in various games at the press conference of the first National Youth Games 2008 to be held in Bangalore from July 22 to 29, 2008, in Bangalore on June 11, 2008. Photo: K. Murali Kumar