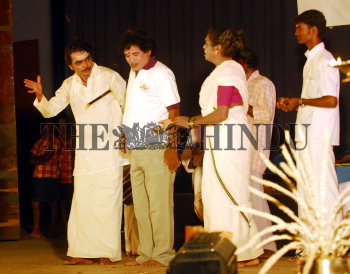 Caption : THIRUVANANTHAPURAM: A scene from art form, 'Parottunatakam' staged by Mannoor Chandran and his troupe in Thiruvananthapuram on November 13, 2006. It was a beautiful theatrical expression of an ailing art form. Palakkad-based Mannoor Chandran and his troupe treated the audience at Karthika Tirunal Auditorium in Thiruvananthapuram to an excellent performance of 'Porattunatakam'. The play was staged on the first day of Sarang National Theatre Festival, organised by Sri Sathya Sai Orphanage Trust. A form of folk theatre that is popular in Northern Kerala, humorous songs, comic innuendos, dance and music are some of the highlights of a Porattunatakam. Photo: S. Mahinsha