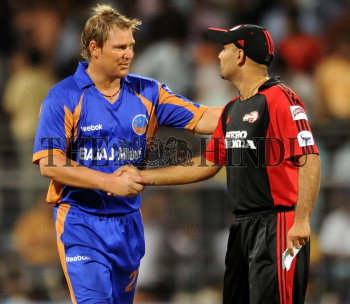 Caption : MUMBAI, 30/05/2008: Rajasthan Royals captain Shane Warne (left) and Delhi Daredevils skipper Virender Sehwag greet each other after the toss in the first semifinal of the DLF Indian Premier League Twenty20 cricket tournament at the Wankhede Stadium in Mumbai on May 30, 2008. Photo: K. Pichumani