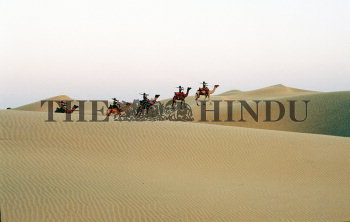 Caption : A six-man patrol returns to the camp in BSF Border outpost along the western border in Raan of Kutch in Rajasthan and Kutch in Gujarat , two western Indian border States.The paramilitary Border Security Force personnel along the western border live with their eyes `peeled' open. Rising above topographical and other constraints, they do their duty _ checking infiltrators and preventing smuggling. February 1986.