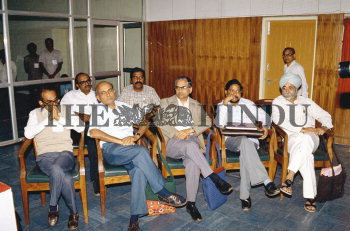 Caption : The scientists of the SHAR at a press conference listening to ISRO Chairman Mr. U.R. Rao's address after the launch of the ASLV in Sriharikota. ASLV, the first in the second generation vehicles of the ISRO is ready at the launch pad. The vehicle, which would provide vital inputs for India's future launch projects, is scheduled to lift off with its 150-kg satellite before April 3, 1987 from Sriharikota in Andhra Pradesh.