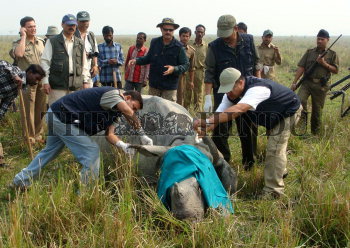 Caption : GUWAHTI, 12/04/2008 : RHINO SHIFTED TO MANAS NATIONAL PARK - An India one horn Rhino being radio collared at Pobitora Wildlife Sanctuary on April 11, 2008. Two male Rhinos have been shifted from Pobitora to Manas National Park, bordering Bhutan under the Indian Rhino Vision, which is a biosphere reserve marked World Heritage Site in Danger by the UNESCO due to wanton destruction of flora and fauna by the Bodo militants during 1990s and early 2000s. The plan to shift four Rhinos to Manas National Park met with set back February 10. 2008, after the tranqulising drug brought by the WWF was found expired poor in quality. It is for the first time that the wild-to-wild translocation of Rhino is taken place in Assam where the total population of is closed to 2,000, the highest in the country. Photo: Ritu Raj Konwar