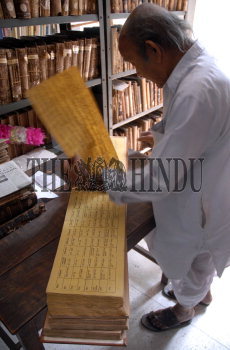 Caption : Kolkata: Retired octogenarian professor Sunil Kr. Chattopadhaya flips through the 200 year-old manuscript of a dictionary on 13 different Indian languages by William Carey at Srerampore College in HOOGHLY district of West Bengal on Tuesday. William Carey, (Augut 17 1761 ÷ June 9, 1834) was an English Protestant missionary, came to India during the year 1793 and settled at Srerampore. He strated translating literature and sacred writings from the original Sanskrit into English to make them accessible to his own countryman. He also was making the polygot dictionary to understand the all the then Indian languages. On March 11, 1812, a fire in the print shop damaged and lost all work. Amongst the losses were many irreplaceable manuscripts, including much of Carey's translation of Sanskrit literature and a dictionary of Sanskrit and related languages, which would have been a seminal philological work had it been completed. A part of the lost dictionary is still availbale at the William Carey Libray of Srerampore College. Photo: Arunangsu Roy Chowdhury March 24, 2008.