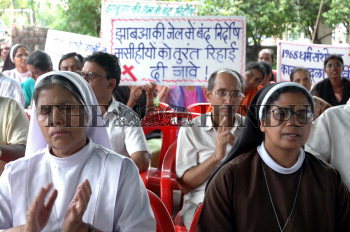 Caption : Christian community members from Madhya Pradesh and Chhattisgarh are offering PRAYERs during the one-day fasting and PRAYER meeting by the Catholic Church against atrocities on Christians in the State. They demanded the immediate release of the 13 Christian members, who were arrested in communal riots at Jhabua district in Madhya Pradesh in 2004. Photo: A. M. Faruqui, 02/08/2005.